Or – Please Form an Orderly Queue!

Train and bus to our start point this morning. Catching one form of public transport is relatively straight forward but catching two and the stress levels start to rise. This was not  helped by just missing the first train we could catch to connect with the hourly bus to Steyning from Shoreham, then finding the second one was cancelled and the third one delayed to the extent that we were running round the corner to the bus stop just as it pulled up. Some would call that perfect timing, but not Miss I like to be at the stop/station/airport at least 5/10/30mins before I’m supposed to be Walters!

It was turning in to another fine day – walking up on the Downs really not a bad way to spend a Wednesday once the bus had deposited us at the bottom of the path just below Upper Beeding. Once again there were fine views back the way we came and we could see Chanctonbury Ring for ages. Just beyond Truleigh Hill which I’ve just discovered hosts a nuclear bunker, we were entertained to see sheep forming an orderly queue – though for what reason we couldn’t say.

Not far beyond that at Edburton Hill was a 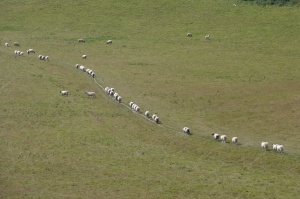 perfect bench with fabulous views, just right for second breakfast, and yet another field full of queuing sheep. That field was closely followed by one full of orderly marching pylons.

By this time we were heading towards Devil’s Dyke and despite it being a Wednesday the sky there was full of people hang gliding and parascending. More queuing but for airspace this time. We stopped to watch the antics of “Mad Nick” who managed to find a thermal which took him from nearly having to land at the bottom of the hill to soaring over our heads at the top. There were various shouts of how the **** did he manage that from on looking fellow hang gliders.

Just as we were approaching Saddlescombe Farm (unfortunately closed Wednesdays) we bumped into Christian one of the Homeopaths at Dolphin House Clinic it was nice to be seen actually doing the walk, but rather strange to have been seen crossing the road just as he cycled by.

We stopped for lunch just as the Jack and Jill windmills hove into view and watched the clouds drifting across the sky and mottling the landscape with patches of sun and shade.

From there we made our way rather slowly towards Ditchling Beacon our end point for the day as John was suffering slightly with pulled muscles. But we got there to see fabulous views right across to Haven Brow at Cuckmere Haven, the start of the Seven Sisters and still two days walk away (well at our pace anyway).

At the Beacon we headed off the South Downs Way and into Stanmer Park. The journey home involved alas a somewhat disappointing meal at Stanmer House and a few more forgotten things (water bottle carrier with water bottle and map) miles not to mention bendy bus confusion but we got home in the end.