While sitting at my computer this afternoon I noticed a movement out of the corner of my eye and there sitting behind my bird bath was a fledgling blackbird, which the male had just fed. 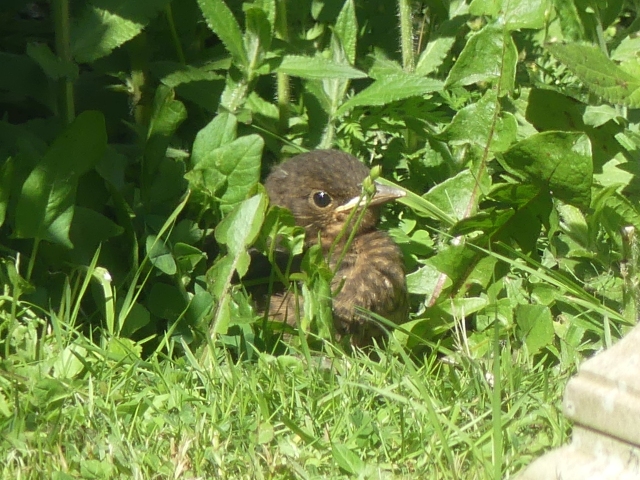 It was a wild and stormy day so I was slightly concerned about it (as one is as an interfering human!) but I watched avidly for the next 40 minutes or so and eventually the male came back with a beak full of tasty treats – well for a blackbird chick that is.

Off he went again and I double checked the RSPB website for info about fledgling chicks. Of course we should in the majority of cases do nothing. So I just sat and watched. A bit later on I was delighted to see the chick hopping about and calling to its parent so I figured it was ok. I have to confess to putting out some stale bread crumbs which I then watched being collected and fed diligently by the male to the chick.

The crumbs also attracted the female who was quite aggressive towards the male. But I guess I might be if I’d been sitting on eggs and then feeding chicks and was now getting ready to have another clutch of eggs!

Even with all this going on the male still managed to find a moment to sit in the hedge and sing out to defend his territory before going back to feeding the chick.

This entry was posted in 30 Days Wild. Bookmark the permalink.