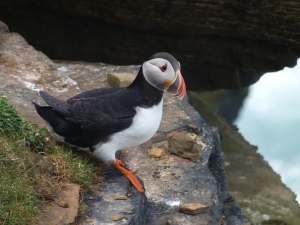 Not quite sure why we decided to go to Yesnaby today. It was a bit of a spur of the moment decision but it was the right one. Didn’t get a site of the rare Primula scotica. If I had this blog might have been about flowers.

Nor did we take a Geiger counter, if we had this might have been about campaigns against drilling for Uranium on Orkney. Instead we were treated to an unexpectedly close encounter with puffins.

The reports aren’t in as to how successful the 2015 breeding season has been but we hope that it will be as good as 2014 (a good year apparently). What else can I say but there’s some interesting facts about puffins here

We did look at the waves coming in off the Atlanic and Yesnaby Castle a small stack similar to the Old Man of Hoy (which I thought looked like Sponge Bob on a surf board!)

This entry was posted in 30 Days Wild, Orkney and tagged 30DaysWild. Bookmark the permalink.